You've just been told school is cancelled. For weeks. To prevent the spread of disease.

I'm sorry friends, I've been there. When we were told that Jonathan needed a third winter of isolation, I wanted to cry. And it was the best choice we could have made. You see, to a micropreemie, RSV is a lot like COVID19. And we did not want to see our little one intubated again.

Isolation for a micropreemie meant this: No large gatherings, no church, no grocery stores. If we broke these rules, even once, even just to attend a wedding of a loved one, we risked him loosing much needed in-home therapies. So we never broke these rules.

And it worked. When we did take Jonathan out of isolation for his first year of preschool, he got sick. He was hospitalized and he needed oxygen. But he didn't need to be intubated, he wasn't at risk of death, and his hospital stay was minimal. We'd given him time. And sometimes, in the case of micropreemies & the new Coronavirus, time is a huge gift.

HERE'S WHAT YOU NEED TO KNOW ABOUT HOW TO STAY SAFE AND SANE WITH SMALL CHILDREN AT HOME AND SEVERE ILLNESS IN THE COMMUNITY.

IN GENERAL:
IF YOU HAVE AN IMMUNOCOMPROMISED FAMILY MEMBER:
SCREENING VISITORS
Grandparents came over, my daughters still had occasional play dates, and my son had in-home therapy three times a week. How did we manage? My rule of thumb was fairly simple:
BUT HOW DO I STAY SANE?
AND HOW DO I KEEP MY KIDS SANE?
Note: I am not a healthcare professional and all advice should be seen as non-medical. Use reason and seek the advice of true professionals.
Posted by Laura Maikata at 9:31 AM No comments:

I asked my son's eye doctor when my son would be able to tell us what his tunnel vision was. We know he has tunnel vision, when would he be able to tell us what he couldn't see around the edges? The doctor said something profound.The doctor said that my son would never be able to tell us where his blind spots are. Because to him, they aren't blind spots. It's not like he sees black or sees through a tunnel. He just sees what he sees and doesn't see the rest. Like I don't think of what I'm not seeing behind me, he never thinks about what he's not seeing next to him or in front of him or where ever the spots without vision are. And most of the time his brain fills in the blanks for him based on what it remembers seeing moments before. This has caused problems for my son when, for example, he is SURE that the foot rest on the rocker is up because he saw me reclining as he approached, so he puts his hand out confidently to climb on to my lap, only to discover with a horrible thud to the ground that, since leaving his field of vision, the foot rest had been pushed in and I'd sat up so I could pick him up. His vision reminds me that sometimes as humans, we need to remember to turn our gaze away from the things we normally see and look for the things we don't see. Because if we don't turn our gaze elsewhere, those things, those places where we are misunderstanding, will never be understood. We all have tunnel vision. And we all can be tripped up by our misunderstandings.
Posted by Laura Maikata at 11:49 AM No comments:

How AHCA trickles down to social justice issues 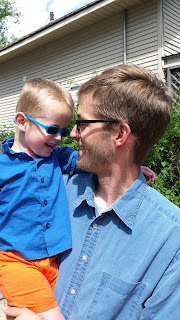 Let's talk justice.
Here's what it's not. Justice is NOT that I, as an advocate for my son with special needs, can get him the services necessary to obtain equal access to educational material. Because I'm a squeaky wheel he has an FM system. Because we asked, he'll have braille. This is great for us, but were we not squeaky wheel parents asking for an interpreter, he'd never have gotten an FM system, his language wouldn't have advanced this much in a year.
So the analogous parent who doesn't have the resources to fight? The school will assume no FM system is necessary, saving a buck or two but ultimately decreasing that hard of hearing child's ability to process what's happening in the classroom.
But guess what COULD make injustice even worse. Loss of federal funding to schools through the new AHCA bill. See, there's this little line on my son's IEP form that says if he qualifies for medicaid, I allow the school to bill his medicaid account for health services received at school. Screenings, etc.
While my son doesn't qualify for medicaid, the school relies on that extra money. It allows their special education budget to expand to meet more of the needs of the students.
Notice, from my first long paragraph, not ALL the needs of students. Funds are still stretched thin.
Folks, TALK TO YOUR SENATORS. Let's not let the new AHCA bill pass.
And if they don't listen to stories about special needs kids, let's talk to their pocket book. WITH SERVICES early on, my child will live a self-determined independent life as a DeafBlind adult. [He has Usher Syndrome, a genetic condition unrelated to prematurity that will take his sight sometime in his second decade or beyond.] We expect him to have a job, live apart from us,etc.
WITHOUT SERVICES EARLY ON, we see a different story. He'll be very frustrated in school. He'll keep falling behind. And this is before his vision declines. He perhaps will hate writing and reading because they were never made clear to him, and literacy is key to his success moving forward. Without services, we can see a future where he'll be dependent on welfare.
Dramatic? Extreme? Perhaps. We hope not to find out. We do know one thing, though. Early interventions make a huge difference. We've seen this in our kid.
Our child will be fine. He lives in privileged. He has parents who will go to whatever extreme needed to get him services he needs. But there are other kids like him, kids on the margins. Changes to their lives early on, getting the services they need at school, will make a huge difference. School budgets are tight. This small change will have huge ramifications. Let's not fail them!
Posted by Laura Maikata at 10:24 AM No comments:

This blogger and storyteller will be performing at Listen to Your Mother! Come join me.

Here are the details:

Celebrating Mother’s Day and benefiting Safe Shelter for Domestic Violence, the live storytelling stage show that gave local motherhood a microphone, Listen to Your Mother: Southwest Michigan, returns to the St. Joseph High School stage for its Grand Finale on Sunday, May 7th at 4:00 PM. Early bird tickets ($15, general seating) on sale now at https://ltymswmi17.eventbrite.com. Admission at the door $20. Brought to you by the dynamic production duo: Beth Haire-Lewis and Kim Jorgensen Gane. 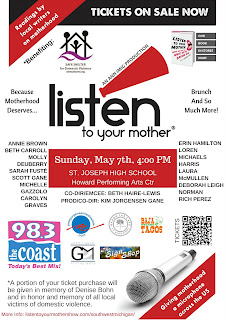 Posted by Laura Maikata at 6:28 AM No comments:

Since the last post Jonathan has continued to eat everything by mouth. He now can have PB&J sandwiches, crackers, cheese, mac & cheese, spaghetti, etc. He's graduated from feeding therapy, and while we're continuing to work with him daily to increase his ability to chew, he's doing great. He's even coming to us and REQUESTING food when he's hungry. Amazing.
Posted by Laura Maikata at 10:33 PM 1 comment:

I got no tube to hold me down.

Tomorrow will mark week 6 of feeding therapy for Jonathan.
Today he ate all his meals by mouth.  It was our first day doing a home meal, and he did okay with it. Some gagging sometimes, yes, but smooth and in. No vomiting, no major behavioral issues, just sitting and eating (and playing) like a big kid.

He still will need his tube for overnight hydration (because of a kidney issue) but he doesn't need it during the day anymore. Let's hope this sticks!

Since my last post, JAM has taken a dry spoon (seriously, and no sweat! He just DID it) and then was slowly introduced to one food, then continued to increase volume of food until it was a full spoon, then added a second and third and now (just yesterday) fourth type of puree, one food at a time with the bite sizes slowly increasing and the amount of time allowed at each sitting also slowly increasing. Bite of food, reward of preferred toy, drink, reward of preferred toy, and repeat until the meal is done. All negative behaviors have been ignored, and it's worked. Negative behaviors are now all but non-existent. (He still lets us know that it's hard. He still shakes his head, says "no," and sometimes gags -- but the incidence of negative behaviors has dropped remarkably.)

Dentists, this kid would be your favorite patient. If you ask him to open, and put your finger right on his chin (no pressure needed) he opens REALLY WIDE and stays open as you count a slow "one two three" and brush his top right teeth, "one two three" for the bottom right, and on for the top left, bottom left, and front top, bottom top. Total of 18 slow counts. I don't think I would have the patience or ability to stay open that long without gagging. But don't tell my son that.  A month ago we had to force-brush his teeth. He wouldn't open at all.

SO, that was huge.

And then today again, another big achievement: he ate an entire meal by mouth.  All purees: a protein, a veggie, a fruit, and a high-calorie drink.

I was on the other side of the one-way-mirror doing a happy dance.

He was so excited he did a happy dance after therapy too, all over the family room, giving hugs to other kids, dancing in circles, and then (as we left to go home for the day) working himself into such a fit of happiness and excitement that he started breathing too hard. Then coughing. Then... well, "easy come, easy go."

Oh well. At least he got it all in by mouth. Next step will be to KEEP it all in.

Then after he gets used to tomorrow's new food (so in a day or two) I get to enter the room and be a part of his meals again.  Slowly they'll transition me to being in charge of the food, and maybe by early next week we'll be able to eat plated meals at home. (Meals are plated, carefully weighed, measured, and analyzed to be sure that consistency of food is similar across the board. Purees must be absolutely correctly pureed. I failed the first three times I tried.)

So far this slow, controlled therapy is working, though. These folks know what they're doing. One month down. I'm excited to see what happens in these next three weeks.
Posted by Laura Maikata at 8:23 PM No comments:

Laura Maikata
I love hearing from readers of this blog. Contact me at momofa23weeker@gmail.com